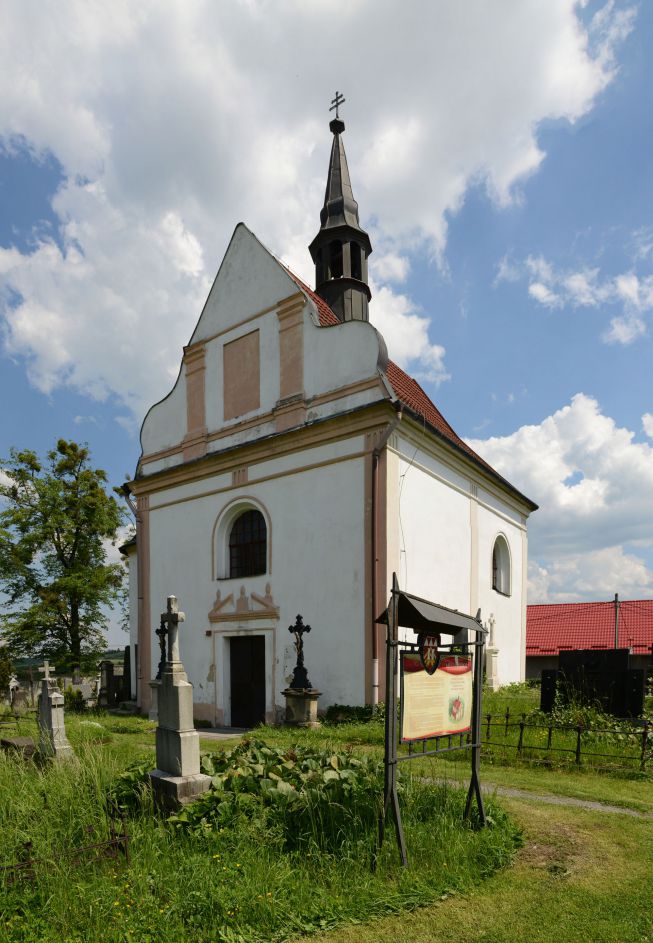 The Church of St. Francis was erected in 1622 on the slope over todays Mistecka Street.

Mr. Josef Lužný, a man who described all Příbor’s religious sights, writes in his publication that this particular church was built for 8 ducats. The church was fitted with an altar, upstairs at the choir were organs and on the tower there were two small bells.

It was consecrated to be a burial ground in 1623. That time the Church of St. Cross was no longer standing there – it has been torn down in 1611. It was rebuilt in 1645, so burials on this ground have started again. The graveyard at St. Francis church was being called the “new” graveyard, funerals continued there until 1720.

In the middle of 19th century another cemetery was needed. The parish churchyard was not in use for that purpose anymore and there wasn’t enough space at the graveyard at St. Francis church. Therefore after 1849 town has bought a parcel at the road leading to Skotnice and made it to a new graveyard. That’s exactly how the graveyard at St. Francis church gained its name. It started being called “the old graveyard” (whereas the one by the road became a “new” one).  There was hardly anyone buried there after 1850.

In 1852 Jan and Barbora Raškovi sponsored a stone cross in loving memory of their son Antonin, who took vows to be a priest.

Many significant people have been buried here: a duke, prominent community members like i.e. town mayors and members of town council, teachers and professors, doctors, architects and other important persons.

Some of the very typical features of this graveyard are casted iron crosses on the graves and hand-forged lanterns decorated with coloured glass.

Within last 30 years that entire place has almost gone to waste. St. Francis church was also wearing off, not that long ago its condition was threatening with a complete collapse. For that reason a decision was taken by the town council to carry out a thorough renovation of the sight.