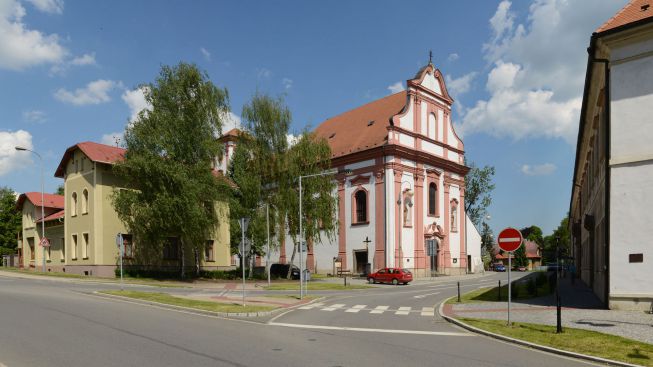 Thanks to Dorota Bremlova and her son, Valentin in 1596 a wooden church was built and dedicated to the patron, Saint Valentine. In the year 1626 as a result of the invasion of Mansfeld’s army on Příbor all was burnt down, including the church of St. Valentine. But the church has been rebuilt in wood again. By the decision of Bishop Charles II. of Lichtenstein a Piarist College and a grammar school were established in Příbor on the 5th of February, 1694. Piarists received this church from the town as a gift. Construction works on the Piarist College and grammar school buildings were finalised in 1700. The church was rebuilt into its present Baroque appearance in 1760-66. The scope of construction works was managed by the rector of Piarist College, Příbor’s born Mr. Heliodor Knauer. Yet another fire affected the sanctuary badly in 1785. Main damage was done to the dome and the roof.

Piarist graveyard was situated at the church. The high altar is adorned with a silver-plated relief depicting events from St. Valentine’s life. According to Dr. Pokorny it comes from about 1596, dating back to the original, first building. Under the altar there’s a painting of Jesus Christ healing two blind men.  It is work of pronounced painter of sacral art, Ignac Raab. There are three altars with paintings situated on each side of the sanctuary’s nave. Those on the left are depicting St. Anthony and the Crucifixion. Both were painted by Ignac Raab. Between them there’s an altar with a painting of St. Joseph the Lord’s Guardian created by F.I. Leicher.

A painting on the opposite site of the aisle depicts St. Joseph Calasantius- the founding father of the Piarist order and it comes from the same author.  Allegedly, this painting shows also Emperor Joseph II. as a boy.  The remaining two paintings represent St. John of Nepomuk and the Virgin Mary. A pew decorated with rococo ornaments and a pulpit both come from the middle of the 18th century.

The church is a monumental object of class I and is registered in the List of monuments of the Czech Republic under the number 1664. In the last fifty years the temple suffered under severe road traffic. Numerous cracks appeared on the side walls and in construction of the roof.  After a thorough architectural check –up of the church’s condition a general restoration of this important building was carried out in the years 1995-96.

A reopening ceremony, being at the same time the temple’s 400th anniversary, was held on the 20th of October, 1996.