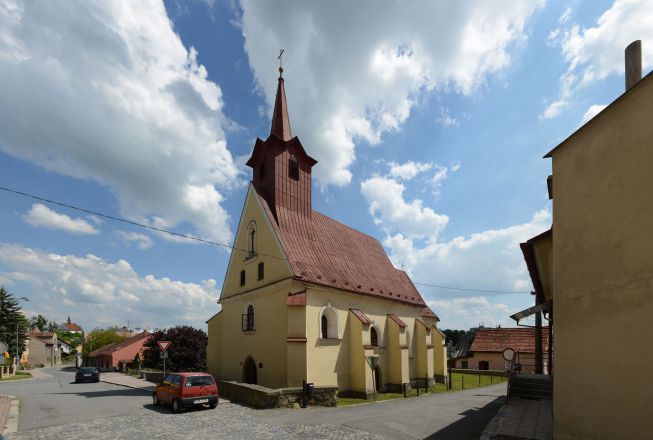 According to some of the archives the church was a parish church for other parish community villages. The wooden church from 1611 was in such a bad shape that cardinal Dietrichstein allowed tearing it down. Next to the church there was a graveyard. That location wasn’t too good as both, the church and the graveyard stood in a very wet place. For that reason the town council was looking for a more suitable place for them. It was decided the church will be rebuilt on a small hill at the north end of the town. According to Řehoř Wolny St. Francis church was built there in 1622 and consecrated in 1623. However, thanks to Marketa Kňurová the St. Cross Church was rebuilt in 1645 on its original place, burials continued here until the year 1720.

In the years 1728 and 1758 the church repeatedly caught fire and burnt down; it was reconstructed in the year 1778. In 1888 a written order was issued forbidding ringing the bells on the church tower due to a very bad condition of the tower construction.

The beams of the tower were rotten; the whole construction was tilted to the side and threatened with collapse.  The church underwent reconstruction in the years 1897-98. A triumphal arch was added to it; newly built shingle roof was covered with slate. The next big scope of works was done in the years 1948 – 50; it included removing shingle roofing and replacing it with sheets of galvanized metal as well as renovating the church’s exterior and interior.

In 1961-62 funerals were organized at the church (as St. Elizabeth chapel had been earlier demolished and the ceremonial hall of new cemetery wasn’t there yet). Last repairs were accomplished in 1994. The tower was repaired and the church received a new façade.

The high altar is an example of folk carving from about 1750. It is decorated with imitation of marble and with gold-plated sculptures. There’s a cross with a life –sized body of Jesus Christ located at the central point; the wooden statue of kneeling St. Helena with a crown on her head was placed on the side of the epistle. At the main altar there are three windows done in a multi-coloured mosaic. On the evangelical side we see the image of Our Lady of Sorrows, and on the Epistle Side there’s a painting of Lord’s Dear St. John the Evangelist. The central window is made of multi-coloured circular ornaments.

The altar of St. Elizabeth is situated on the left side of the church. By the church there’s a cross with dedicatory inscription from 1802. The church and the cross are registered national landmarks.