The museum and the Memorial Hall of Sigmund Freud

The Příbor’s museum was established on the initiative of The Museum and Industrial Society of Příbor, which came into possession of collections of the Second Regional Exhibition of North-East Moravia. The collection was put on display for the wide public at the former town hall building already in April 1913. During WW2 museum suffered under lack of space and had other financial problems. After 1945 its exhibitions were placed at the former Piarist College building. 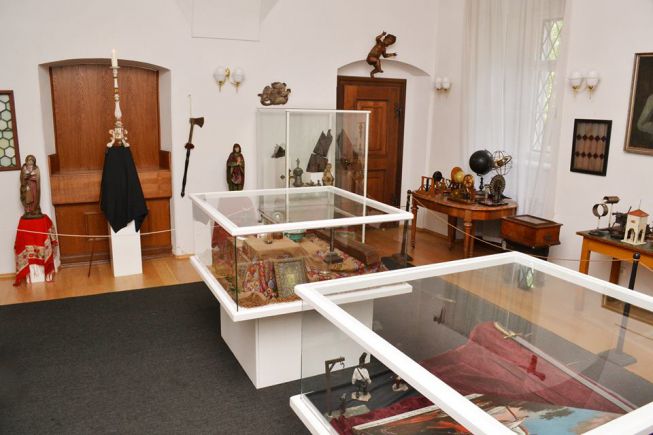 Until 1964 the museum was taken care of by the town, afterwards it became a subsidiary of what was then called a ‘Science Institute’; nowadays it’ s known as the Museum of Novojičínsko.

At the moment museum offers various exhibitions to its visitors: Memorial Hall of Příbor’s native Sigmund Freud and other changing exhibitions at two exhibition halls.

Its library is the most important cultural heritage of the whole museum. It was building up for long decades, starting with the beginning of the Piarist College existence in Příbor.

The books were being acquired from the year 1694 until the very abolition of the Piarist College in the ’70 of the 19th century. Today they create an imposing collection counting 4500 volumes. This library benefited the most from a generous gift of the dean, Mr. David Josef Láník from Valašské Meziříčí , who had put all his collections in library possession.

The library is mostly made up of  books about religion and philosophy.

There are 30 well-kept first editions. Majority of volumes is dating back as far as the 16th - 18th century.

The Memorial Hall of famous founder of psychoanalysis and Příbor’s native, Sigmund Freud was added to the content of museum in 1969.

For more information on any new or ongoing exhibitions, please visit our FB profile.

Last admission: half an hour before museum’s closing time