Mystery of the Old Graveyard

The Church of St. Francis was erected in 1622 on the slope over today’s Místecka Street. It was consecrated for a burial ground in 1623.

Mr. Josef Lužný, a man who described all Příbor’s religious sights, writes in his publication that this particular church was built for 8 ducats. The church was fitted with an altar, upstairs at the choir were organs and on the tower there were two small bells.

St. Francis church has been renovated at the end of 20th  century and on 13th November, 1994 it has been re-opened for public.

On the first sight the graveyard looks very romantic. It has its charm and special atmosphere, even though some of the gravestones are no longer standing in place or have collapsed deeper into the ground, casted iron crosses aren’t standing upright, railings around them are rusty.  Many graves are covered in ivy or moss.

People were buried in that graveyard from 1623.

Today there are 343 graves that we know of. 283 of them have gravestones, crosses or at least their shape is still visible. 59 places are reserved to owners, 32 places figure in register but aren’t assigned to anyone and remaining 192 graves have no owner anymore.

People were being buried in this graveyard mostly from 1623 to 1645. After that date no burial ceremonies were held here anymore. It had to do with the fact that in those times the other Příbor’s church - the Church of Saint Cross was rebuilt (destroyed 1611, re-erected in 1645).

Many significant people have been buried here: a duke, prominent community members like i.e.: town mayors and members of town council, teachers and professors, doctors, architects and other important persons.

In 1852 Jan and Barbora Raškovi sponsored a stone cross in loving memory of their son Antonín, who took vows to be a priest.

For its whole existence the graveyard was left to its fate. At the moment 50 graves are still being taken care of.

Map of the Old Graveyard 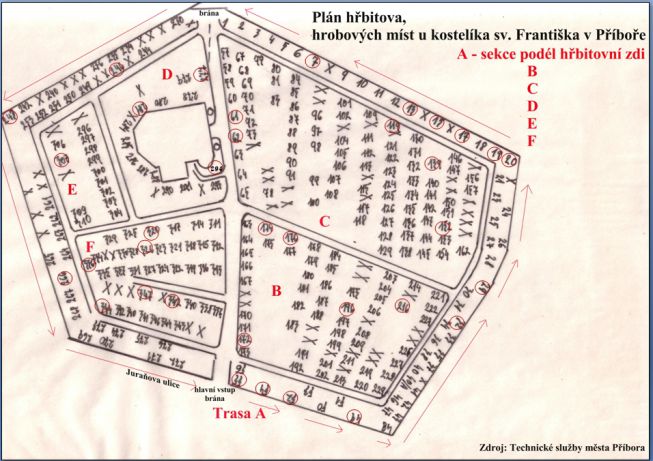