This monument was the first one in Příbor (not counting all statues of saints). A round metal relief portraying Řehoř Volný was placed on the front side of a rectangular prism made of black stone, narrowing upwards to a height of approximately 2 meters.

Down on the linden leaf motive made out of metal there’s a shield with Moravian female eagle. Inscription in the back says: „Radoká příborskému ctitelé 1893“(For the worshiper of Příbor from Radoká 1893).

Relief is a work of art of the sculptor R.V. Smolík, who is also author of Jan Neruda’s memorial plaque at the famous Prague house At the Two Suns.

On the 13th of May, 1894 V.R. Smolík came to Příbor to negotiate the deal. Monument was built on the initiative of Ph.M. Ferdinand Pokorný, a native pharmacist and historian for the occasion of the hundredth birth anniversary of Řehoř Volný, but it has been unveiled only a year after.

The unveiling ceremony took place at the church of St. Valentine on the 23rd of September, 1894. The ceremonial speech was given by Director Prasek from Opava and by Ferdinand Pokorný. The unveiling was attended by representatives of the municipality, fire brigade and by the general public. There was an ethnographic exhibition opened at the town hall that day.

Trees and bushes planted around the monument soon grew into a little park at St. Valentine’s church. It took few years until the green area was overgrown and had to be cut down. That happened on the 25th and 26th of March, 1909.

During the German occupation memorial was removed from the church site and hidden. On the 8th of May, 1945 the very place where monument was located became a burial ground for the Russian soldiers fallen during liberation of Příbor. In September their bodies have been exhumed and moved to the central cemetery in Frýdek.

Řehoř Volný’s Memorial has not been moved back to its initial location but was placed on the bank of Lubina River instead, near the train station where it stands until the present day.

The sight is now owned by the town and it counts as a cultural monument registered in the central list of cultural monuments of the Ministry of Culture of the Czech Republic under registration number 50495 / 8-4004 of 01/10/2000. 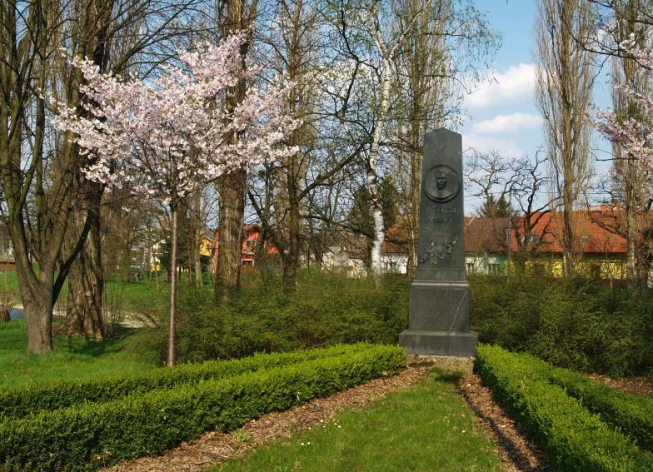