The monument of the most famous Příbor native was unveiled on the 4th of October, 1969 down the post office in Jičínská Street to mark the 30th anniversary of the death of Sigmund Freud. The bust is the work of sculptor František Navrátil and the memorial’s base was formed by Ing. arch. Zdeněk Makovský. The very crowdy unveiling ceremony was attended by the chairman of Psychoanalytical Society Assoc. Dr. Jiří Cvekl, PhD. from Karlova University.

In March 1994, the monument was dismantled and stored, because the place where it initially stood was intended for building a new nursing home. Monument found its new, more suitable location in the park behind the town hall. It was unveiled there on Saturday, the 24th of September, 1994 to mark the 55th anniversary of Sigmund Freud’s death. 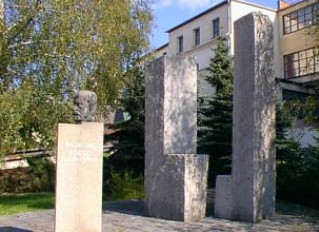