In the days of the 8th and 9th of April, 1947 representatives of Town Příbor: MNV Chairman, Mr. Jan Hošek, temporary administrator of the Masaryk’s grammar school Ota Vaverka and a teacher Čestmír Hrnčárek drove to Lány in order to lay a wreath with a ribbon saying:  „To our President and Liberator –grateful Town Příbor“ on President’s T.G. Masaryk’s grave. What they brought back from Lány was a handful of soil from the grave, which was then put into a small metal container and placed in the foundations of the monument.

At Lány, the delegation met with Foreign Minister Jan Masaryk and with PhD Alice Masarykova, who invited them to the unveiling ceremony of their father’s monument on the 25th of May, 1947.

A bronze bust sculpture was created by an academic sculptor Vincenc Makovský; granite pedestal was made at the workshop of František Kerle in Zásová. A handful of soil from president’s grave in Lány was placed in the foundations of the monument. The inscription engraved under the bronze bust said: “We will remain faithful”. The unveiling ceremony took place on the 25th of May, 1947. It was attended by the son of T.G. Masaryk, Foreign Minister Jan Masaryk. When the Minister lifted the veil from the sculpture, he said: “"Well, I happen to know that gentleman."

The monument stood next to St. Valentine’s Church. The post office has issued a special stamp for that occasion. At the beginning of ’50 the monument was removed from its place and hidden. On the 5th of May, 1968 memorial was brought back in its place and unveiled again.  This time the speech was given by a teacher, Mr. Josef Švábenický.

Around 1972 the memorial was secretly removed once again, only that time the bronze bust has probably been destroyed. It was never found.

On the 11th of March, 1990 a brand new memorial with a bronze bust sculpture being a gift from Mr. František Konečný was unveiled. A teacher Mr. František Marušan held a speech on that occasion. 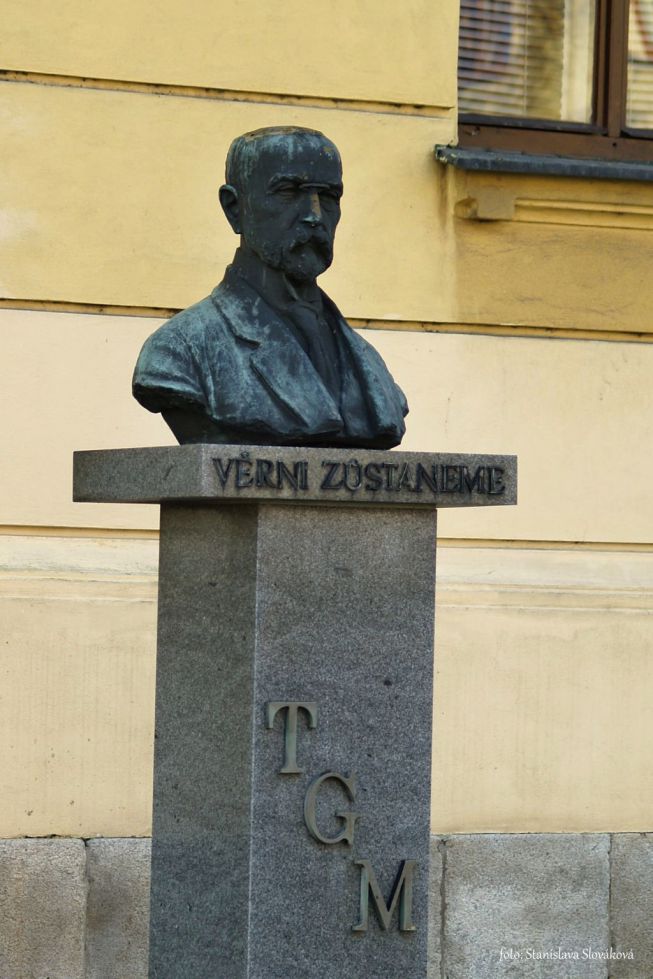