The monument was unveiled on the 7th of October, 1928. Initially, it stood opposite the sokolovna (Sokol Hall) facing the little square; on the place where formerly the Monument of Liberty was. The latter was moved to Etzlova Street, near Sklipek restaurant & wine cellar. The monument is a work of Příbor’s born sculptor, František Juran. A first stone to it was laid on the 29th of July, 1928.

The monument is composed of two soldier figures. One of them is standing on stone stairs, wearing military coat and a helmet; bending over he holds a grenade in his hand. The other soldier has fallen over at his feet. Behind the attacking soldier’s figure there’s a 3,5 meter high rectangular stone pillar with a metal relief of President Masaryk’s portrait at the top.

Surprisingly enough, this monument survived the whole communist period, whereas the other Masaryk’s monument was twice destroyed.

Model for the statue of a soldier was Příbor’s citizen, Mr. Joseph Prachař Senior.

At the back of the monuments there are names of the fallen soldiers and legionnaires from the years 1914 – 18. The names of war victims tortured at Nazi prisons and concentration camps as well as the names of foreign soldiers stationing at Příbor were added to the both sides of the memorial only later. Commemorative letters were placed in the foundations of the monument.

The unveiling ceremony speech was held by Mr. Antonín Schwarz in 1928 (in 1945 Mr. Schwarz changed his name to Černý), who was a practice teacher at the pedagogical institute here. Every year after there were small celebrations taking place at the foot of the monument, happening on every White Sunday, on a so-called ‘Eastern Peace’ day.  Mr. Černý would always hold a little speech there.

During the occupation the memorial was removed and hidden at the shed in the garden at the Sarkandrova Street no. 530 (today’s Ostravska Street).

After liberation on the 4th of May, 1946 the memorial was moved to a different place, close the school at Jičínska Street. Stone work was done by Mr. Arnošt Dobeš. Original documents from 1928 as well as some new documents were placed in the foundations of the monument again. At the re-opening ceremony a speech was held by Professor Rudolf Tlapák from Ostrava. In the years 1993- 1994 memorial was renovated and the names of the fallen soldiers were restored. 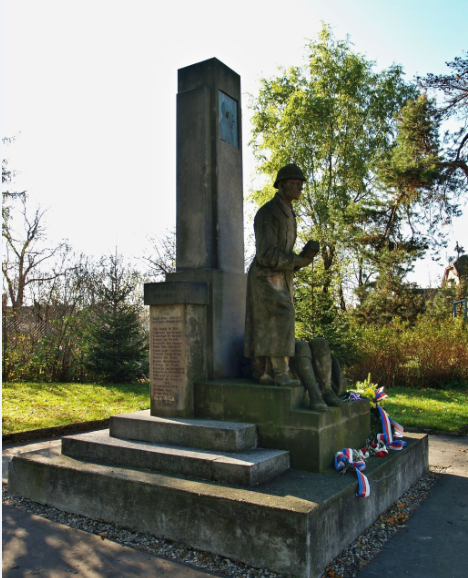