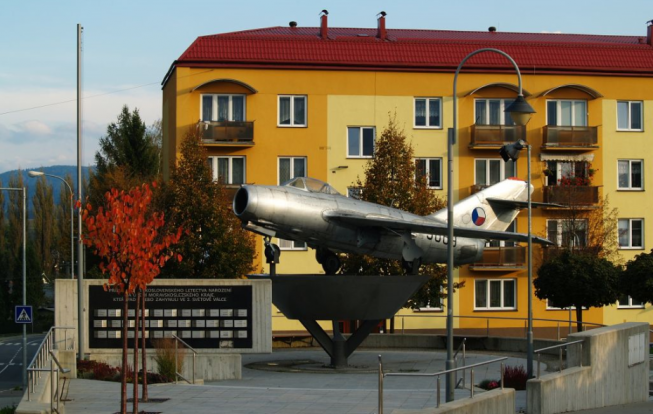 The Unveiling of Czechoslovak Airmen Memorial in Příbor took place during celebrations of International Veterans Day.

Although the Příbor based unit of UzO VSR is rather small, it is still well known for its activities. Let’s recall in our memories how two years ago they managed to push through their plan of unveiling memorial plaque commemorating victims of the communist regimes. The whole project took four years and became known all over the country.

This time, on 11th of November during the celebrations of International Veterans Day a new Czech Airmen memorial in Příbor dedicated to all those, who together with British RAF had fought in WW2 for restoration of Czechoslovakia, but also for those pilots of 8th Fighter and 1st Transport Regiment of Příbor, who lost their lives on duty at the Mošnov airport.

A completely devastated fighter aircraft MiG 15 bis was used to build that memorial. The town provided funds for purchase of the machine, which was then repaired by the members of local VSR organization for free. That is how this quite unique, one of a kind air memorial came to its existence. There is no other one like that in the whole Czech Republic.

Present there was also the Military Band from Olomouc; soldiers from Hranice presented residents their infantry weapons.

A flight of combat helicopters Mi 24 from Přerov over Příbor 's skies was planned that day, however finally it did not happen due to adverse weather conditions. Unveiling of the monument with engraved names of pilots was done by Czech defence minister and town’s mayor Ing. Milan Strakoš. During the ceremony an honorary salute was fired.

Celebrations began with children’s paper lanterns parade and ended in Sigmund Freud Square with the fire show done by artists and later also with fireworks.

The dignity with which the whole day was celebrated and well prepared entertainment afterwards made this patriotic occasion very special. Citizens of Příbor knew to appreciate it and were very enthusiastic about it.

The lack of interest on part of representatives of Joint Force Command of Olomouc, editors of military A-report magazine and of aerospace magazine LETECTVÍ+KOSMONAUTIKA, who didn’t arrive despite of the fact of being invited, is still beyond our comprehension.

They did not act the same way during the unveiling of the Czech Airmen Memorial and Skydivers Memorial in Pardubice this year although the Pardubice memorial cannot be compared to the Příbor’s one. We still hope one day they would realize their mistake. 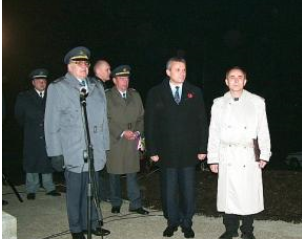