The wall surrounding the parish church defines the ground and space belonging to it. Some researchers tend to think there was a Hückeswagens‘ fortress still standing there in the 2nd half of 13th century. The parish church, which was built a little later, had probably also strategic and protective functions.

The outer wall was built using quarried stone material and has been altered several times during its existence. Its current appearance comes from the 2nd half of 18th century;  chapels/ stations of Way of the Cross are dating back to the 2nd half of the 19th century.

The floor plan of all those chapels is semi-circular, shallow niches are framed with pair of Ionic pilasters bearing ceramic reliefs depicting "Stations of the Cross" from 1887.

The main entrance to the complex is located on the opposite side of the west portal of the church. It consists of two-part forged bars, which are complemented with a smaller single gate on each side. The grates come from 1809 and are suspended between four rectangular pillars from the 18th and 19th centuries. Later on, the statues of St. John Sarkander, St. Cyril, St. Methodius and St. John Nepomuk were placed on tops of those pillars.

Stations of the Cross

The Way of the Cross consists of 14 chapels / stations leading around the outer wall of the parish church. In 1887 their canvas paintings were replaced with ceramic reliefs created by Vojtech Mottl, Příbor’s professor at the German gymnasium. The ceramic reliefs were fired at Neusser’s warehouse in Klokočov. 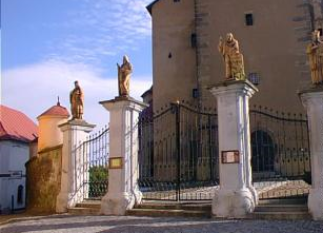