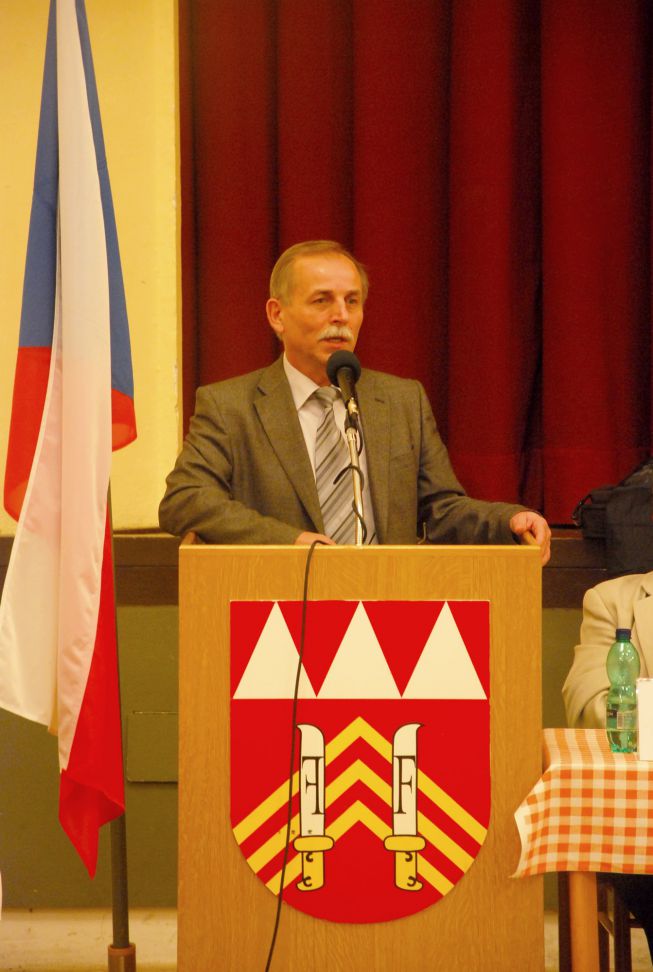 Former long-time mayor of Příbor. He was a head of Příbor’s local government for almost 25 years in a row with only one monthly break in his service.  That makes him the historically longest-serving Příbor’s mayor, taking over the title from former record-holder František Peřina (2nd half of 19th century, he was the first Czech mayor).

Milan Strakoš was born on the 14th of September, 1950 in Ostrava as the middle child of Jan Strakoš and Drahomíra Strakošova. He lived in Příbor right from his birth throughout his whole childhood. After primary school he went to the Technical School of Mechanical Engineering in Kopřivnice from which he graduated. Subsequently, he continued with his studies at the Technology Faculty of Mechanical Engineering at Brno University, majoring in technology projects. After passing state exams in 1974, he decided to reach for more. And so in 1984; together with his other classmates he became one of the first postgraduates with a degree in robotics of manufacturing systems – something, which at that time was a completely new field of studies.

His first employment was at Hutní projekt Frýdek Místek (Eng.: metallurgical project; ironworks). In the beginning he worked there as a designer, but soon was promoted to a position of Project Manager and finally became their Chief Engineer. Milan Strakoš co-worked there on project documentation for large manufacturing plants. During years 1974-1989 he became an author and co-author of 15 improvement ideas in the design of which three, concerning handling oversized and bulky materials, were patented.

He did sports from his early childhood: he loved football and used to play it regularly until the start of his college studies.  His other passion was table tennis. He used to train at Sokol and later at telovychovna jednota (Eng.: gymnastics unity, a sport club). He played on Příbor’s team, reaching level of ‚divisional championships Czech Republic‘ and winning championships of Nový Jičín district five times.  He was the coach of table tennis team until 1990, having to quit only after being elected for Příbor’s town mayor.

This happened after municipal elections in autumn 1990. Actually, at that moment Milan Strakoš was already a leader of the council, as he had been appointed to that function by the town council already earlier– precisely speaking on the14th of December, 1989. Although we‘re talking about the same position of a head of town’s local government,  there’s a need to mention that back then it was called ‚representative of municipal council‘ and not  ‘mayor’. In January, as a member of National Committee he led our town to its first free municipal elections. He was than chosen for Příbor’s first mayor in our new history (until that moment we have only had ‘representatives‘).

He was always very keen on recalling the first two terms of office in his memories. He remembered the time following first municipal elections in 1990 as full of euphoria and good mood. Best of all, he remembered the people working with him at that stage in his life: the ones, who had worked at the town hall and those who had worked for various other organizations. He remembered their enthusiasm, good spirit, will to make an effort.  He was the town mayor for 6 terms of office. Every new term of office was in his words a little more demanding and challenging than the previous one. Initial euphoria was gone; amount of work to be done was still growing. In the year 1989 the town became an urban conservation area. It was necessary to start repairing some buildings and churches.  The monastery needed renovation. Later it became the largest building conservation ever planned.

Soon afterwards construction works on town’s outdoor swimming pool were finalised successfully and the place had been opened to public.  The still lacking gym was finally built in Příbor in 1991. (Few years later, thanks to the mayor, another gym was built at Masaryk’s Grammar School.)  Příbor’s Nursing Home was renovated.  Market Square was reconstructed in the year 2000. New bypassing road was ready, too. Milan Strakoš was very proud of it all. He was very pleased to watch the ongoing repairs of the monastery garden and the refurbishment of the Culture House.  He was particularly happy about the fact, that renovation works of the house of birth of Sigmund Freud in 2006 have taken only five months. He used to say that Příbor’s citizens will learn to appreciate it one day.

He himself was also a member of Freudian Society, as well as a chairman of the Foundation of Sigmund Freud’s Birthplace.

He considered celebrations of 150th anniversary of Sigmund Freud’s birth to have had a great influence over the town’s life.  For that very special occasion, birthplace of our famous father of psychoanalysis was first-opened to public. People like President of Czech Republic and the descendants of S. Freud- his closest living family, i.e. great-granddaughter, Mrs. Jane McAdams Freud have all paid us a visit on that day.

The other event, which was considered by our mayor to be influential and important for Příbor happened in the year 2010. The National Opening of the European Heritage Days brought to our town not only Czech Minister of Culture and mayors from all over the country but also representatives of the Association of Historical Settlements in Bohemia, Moravia and Silesia. Příbor played a very important role in the structures of that association- our town was one of the board members. Same association had shortlisted Příbor for finalist of the contest called „Historical Places of 2012".  Thanks to Milan Strakoš, Příbor had its word in other important national organization – like i.e. the Association of Towns and Municipalities of Czech Republic.

He actively supported project of twin towns – in the first instance being cooperation between distant but similar towns and villages within the country, but happening also on international level. As the project was fruitful, it resulted in starting new cooperation with German Rehlingen - Siersburg and years afterwards with Polish Przedbórz. All that belonged to Milan Strakoš’s most successful projects. The representatives of the both twin towns participated at all the major Příbor’s cultural life events, music festivals and celebrations.

Many Příbor’s events were successful due to support and financial contributions of countless small and large companies from near the town. The mayor always did his best to maintain very good relationships with them. Without their donations, the town would have never thrived the way it did.  Those companies were always great help at bigger town events.

In his life, Milan Strakoš won many awards: in 1998, after the flood he received an Honourable Mention of Prime Minister. Year 2004 brought him Medal of Honour of the Minister of Internal Affairs and the Medal of Honour of the Czech Military Association of Rehabilitated Soldiers. For his service he had been given an Award of Czech Air Union.

Milan Strakoš was our mayor until the 6th of November, 2014. Afterwards he was a member of council, the chairman of the Audit Committee, committee member of Telovychovna Jednota. He was an active member of ODS (political faction) for years.

His hobbies were among others: sports (table tennis) and history of his birth town. He collected everything to do with it: postcards, written documents. His growing interest in photography was the reason he photographed a lot, more and more with the time. He learned photography while he was still at primary school; he belonged to the Photo club hobby group led by Mr. Loukotka. The life of Příbor became obviously the favourite topic for his photoshoots – he took snapshots of events, photographed buildings, street corners, small old streets near the parish church. His new hobby was related to his plans of writing and publishing a book on Příbor - he wanted to write about the past quarter of millennium.

With his head full of plans and ideas how to better visualize Příbor and how to help the town’s development (like i.e. to lead our little table tennis players towards entering higher level of  contests or to establish a society of so-called Friends of Chronicles of Příbor’s History, to publish a book about the town, to set up a small Příbor‘s archives, etc...) he died suddenly on the 26th of February, 2015, at the age of nearly 65.

He was married, had a daughter, a son and two grandchildren.