Flag and coat of arms

Coat of arms and flag of Příbor

The initial emblem of Pribor was same as the coat of arms of Hückeswagen masters, by whom the town was established before the year 1251. Their sign was composed of three red chevrons on a silver background.

In the year 1615 the bishop of Olomouc, Cardinal Francis of Dietrichstein changed it by adding elements symbolizing Olomouc bishopric as well as other elements of his own coat of arms (citation: „we give it a shield and place three chevrons of yellow or gold in the red middle of the shield , each reaching higher than the previous one,  two pruning hooks fawn or silver in colour, with their handles clove and the letter F to stand for our initial Christian name - and the three bowls also in fawn or silver on the top . .. ".

A flag was handed over to the mayor Ing. Milan Strakoš . Mayor’s companions on that day were: his deputy Mr. Jan Monsport and the Chronicler of the town, Mr. Lubomír Loukotka. Ceremony took place on the 5th of March 1996 at the Czech Parliament building in Prague. The flag was handed over to our representatives by the Speaker of Czech Parliament, PhD. Milan Uhde in a form of a "Decision no. 91" granting own flag to the time-honoured town of Příbor.

Its appearance goes back to the oldest known signs of the town. Flag is composed of three parts: two white stripes on both sides and red field in the middle (format ratio white to red is 1:3:1). On the red background there are three golden chevrons placed one above the other. Stripes of white on each side are symbolizing pruning hooks of the town’s coat of arms.

Project was designed by PhD. Karel Miller, Director of the State Regional Archive in Opava and then accepted by the Heraldic Committee of Parliament of Czech Republic. On the 8th of September, 1996, being the day of town’s fair the flag waved for the first time on the top the town hall’s roof . 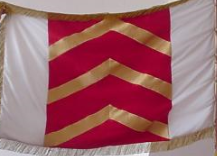